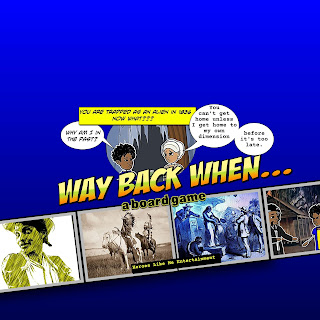 Way Back When...A board game

You are an Alien from another dimension trapped as a Slave in 1836. Now What?
You are one of four Multidimensional Alien Travelers who is studying our Earth of the past and in particular the Deep South of 1836 at Fort Mitchell, Alabama. In order to better understand life in 1836, you transform yourself into a Negro---A Slave. Unfortunately, you didn’t fully understand that the Negro is not considered a human being during this time but merely property. You are beaten unconscious. When you wake up you are in a slave auction house. You are hungry, beaten and only want to get home. You have to reach the Multidimensional Portal in order to get home along with the other three travelers. You realize that there is one time during the year that slave masters treat their slaves with some measure of decency...It is the season called Christmas. You now must travel back to the Multidimensional Portal in order to bring this revelation of Christmas back to your dimension in order to save your world from its own Inhumanity.
So what do you do NEXT?

Lt. Curt Masters, a Tuskegee Airman, is flying a combat mission over the skies of Nazi Germany in 1945. He encounters an alien craft. He engages the craft unsuccessfully. Soon, he is aboard the UFO and is charged with Obstruction of Galactic Operations. He and the people of earth are on trial for their survival. Can Curt Masters free himself from over a billion miles away? Will he ever return home? Or will he die at the hands of The Warlord. In this new universe, he meets Aliena-a Galactic Police officer, Sutter-a mysterious friend or foe and ARC, who is an android without a will of his own. Curt will learn that once you Look Forward you can Never Go Back. Written by Chris Love, this graphic novel offers new worlds and possibilities. A companion feature film has been adapted from this graphic novel. 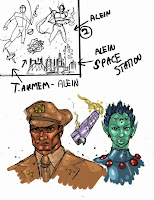 The Alien Ambassador: Sticks and Stone

The Alien Ambassador: Sticks and Stone
13 year old Nathan Turner has to juggle
life at school with protecting the Earth.